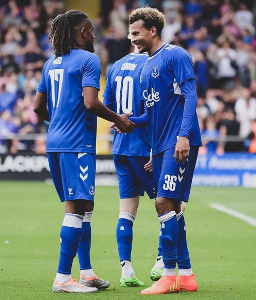 Everton and Aston Villa clashed at Villa Park on Saturday in an action-packed game in the second game-week of the new Premier League season with the final score ending in a 2-1 defeat for the Toffees.

Ex-Chelsea legendary midfielder Frank Lampard continued his experiment of utilizing Nigeria international midfielder Alex Iwobi in the deep-lying playmaker role at the centre of the pitch alongside Doucoure as new signing Andre Onana started from the bench.

The opening exchanges were frantic as both teams battled hard for superiority as Danny Ings burst through the centre and forced the ball out to Matty Cash on the right flank whose cross was blocked by James Tarkowski.

New signing Diego Carlos was able to beat Iwobi fairly easily in the air but the centre-back's header was off target.

Iwobi and Doucoure were unable to stamp their authority in the midfield for the first 20 minutes as Villa's midfielders ran rings around them.

Ings opened the scoring in the 31st minute after a defensive blunder from Everton.

Iwobi was instrumental in stopping a probing attack from Villa in the 43rd minute as Cash and Digne looked to cause damage.

He was also able to push an attack and send in a deep cross which fell to Gray, however, Kamara cleared the danger.

The second half started in a similar fashion to the first as attacks flew up and down the pitch. Buendia scored a second for Villa in the 85th minute from an easy tap-in.

After some good work by Everton's new signing Onana, Digne put the ball through his own net in the 87th minute to give Everton a lifeline. Mings then nipped in to deny Iwobi a chance on goal with a crucial tackle in the 90th minute.