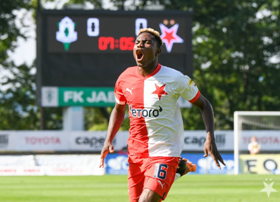 Moses Usor is delighted to score his first goal in the Czech Liga for Slavia Prague in a five-goal thriller against Jablonec at the Stadion Střelnice (Jablonec nad Nisou) on Sunday afternoon.

Usor transferred to Slavia Prague in the winter of 2022, initially starting off with their B team before earning promotion to the first team on the back of his impressive performances during the pre-season preparations.

The 20-year-old netted his first senior goal for Slavia this month as they beat Panathinaikos 2-0 in the third qualifying round of the Europa Conference League.

Against Jablonec, he set the tone for a brilliant contest when he curled home a free-kick to open the scoring in the eighth minute.

Commenting on his wonderful strike, Usor told the official website of Slavia Prague : "I am very happy about it. It came after a few minutes of the match.

"I like to score goals, I'm a scorer. I wanted to kick that free kick and I hit it. I'm very happy.

"Shooting was my clear goal. Someone told me to pass, but I said I had to try! And it worked."

Usor in a product of 36 Lion, the Nigerian academy that produced Slavia Prague teammates Peter Olayinka and Yira Sor.

In the second half of last season, he scored six goals and registered three assists in nine appearances for Slavia Prague B in the Ceska Fotbalova Liga.