...the complete Nigerian football portal
Subscribe
Opinion: Why do so many top clubs need Ndidi in their team but few look his way?
Published: August 15, 2022 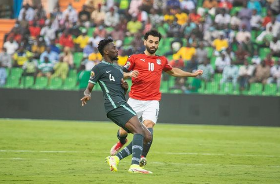 The Premier League season is underway and having concluded game week two, it is safe to say that the EPL has not lost any of its glamour, competitiveness and excitement.

On Saturday, Leicester City made the trip to the Emirates Stadium to face Mikel Arteta's in-form Arsenal. The score ended 4-2 in favour of the Gunners with Nigerian international Wilfred Ndidi playing the full ninety minutes for Brendan Rodgers's men.

Despite the defeat, Ndidi was a rock-solid presence in the middle of the park with his last-ditch crunching tackle to deny Gabriel Jesus a hat-trick in the 37th minute a world-class one.

It is clear that Ndidi is one of the best defensive midfielders in the Premier League with his statistics and eye-catching performances.

His skill set is certainly needed by many top clubs like Manchester United, Arsenal, Liverpool and even Chelsea but very few of these clubs look his way.

Why is this so? Allnigeriasoccer takes a look at the situation. While Ndidi's ball-winning is on par with the best defensive midfielders on the planet, his ball progression and press evasion still need a bit of work.

Playing in a top team means holding onto possession and dictating play for large parts of the season. This will be almost impossible if the central players are not so great on the ball.

With the addition of the aforementioned skill to his bag, the Super Eagles star can make the step up to the very top teams.