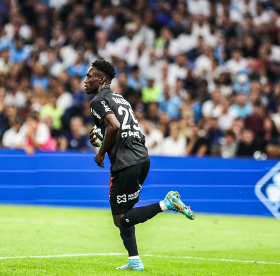 England U21 international of Nigerian descent Folarin Balogun arrived at Stade de Reims in the form of a loan without an option to buy at the end of the 2022-2023 season.

Balogun is already shining brightly after two games with the six-time French Ligue 1 champions, netting in back-to-back matches against Marseille and Clermont Foot.

With his strike on Sunday, the Anglo-Nigerian became the first Reims player to score in his first two appearances in the Ligue 1 since Jacky Pérignon during the 1978-1979 season.

About two weeks ago, Balogun was recruited by Reims to replace Hugo Ekitike, who transferred to Paris Saint-Germain.

After an impressive start to his career in France, Balogun revealed his ambitions with Reims for the 2022-2023 season.

"My goals are to help the team finish higher than they did last season (12th)," Balogun said to L'Union via Ouest France.

"And on a more personal level, I want to improve as a player. I have liked the philosophy of the club, to play young people while remaining competitive.

"After talking about it with my family, we decided that it would be the right choice for the rest of my career."

Balogun spent the second half of last season on loan at Championship club Middlesbrough FC, where he directly participated in six goals in twenty-one outings across all competitions.