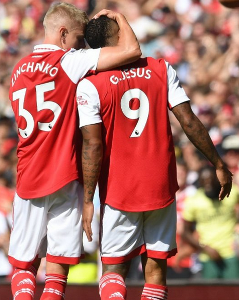 Former African Footballer of the Year and retired Nigeria international Victor Ikpeba has waxed lyrical about new Arsenal striker Gabriel Jesus, describing the Brazilian international as a 'massive asset' for the Gunners.

Jesus arrived at the Emirates Stadium earlier in the transfer window from Premier League rivals Manchester City having grown frustrated with his role and lack of consistent game-time in Pep Guardiola's team.

The Brazilian scored twice and assisted a further two for the Gunners last Saturday on his home debut against Leicester City with his first goal being a fantastic lobbed shot and the second a well-placed header at the back post.

Speaking on SuperSport's Monday Night Football, Ikpeba had this to say about Jesus : "His first goal was technically brilliant, a very close, tight angle, the second goal too for Jesus.

"I've always been a big fan of Jesus when he was playing for City, I think he's a massive gain for Arsenal to have Jesus.

"The moment they allow him to play freely upfront, moving with freedom, not to defend, he will be a very dangerous striker. He can dribble, he has pace, he's quick, those are the assets of Jesus.

"So I am happy for him. I am really shocked Pep allowed this talented Brazilian to go to Arsenal. Can Jesus do it alone? If the likes of Saka, Martinelli and others can support Jesus, Arsenal will be a threat.

"But I still have my reservations that Arsenal will not end the season in the top four but Jesus would be a massive asset for this Arsenal side".

The 25-year-old Jesus is undoubtedly the star of a new-look Arsenal side and Ikpeba certainly rates the Brazilian highly.

He had an outstanding preseason, scoring against Chelsea in America, before netting a hat-trick against Sevilla in the Emirates FA Cup.