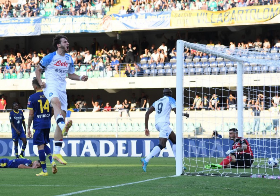 Napoli made the trip to the Stadio Marc'Antonio Bentegodi to take on Verona in their opening game of the new Serie A season with the final score ending in a 5-2 scoreline in favour of Luciano Spalletti's men.

Super Eagles hitman Victor Osimhen made the first Napoli line-up for the season and was able to grab a goal and an assist thus opening his accounts for the new campaign.

The game started in a good fashion as Osimhen started to show his physical attributes by forcing a freekick in a dangerous area in the sixth minute.

The Nigerian then missed two opportunities in the eleventh and twelfth minute side-footing both attempts wide of the mark.

Against the run of play, Verona took the lead with Kevin Lasagna firing a shot into the bottom corner. Napoli then equalised through Khvicha Kvaratskhelia who headed in a cross.

Osimhen put his team ahead with a smart finish after some good work from Giovanni Di Lorenzo in the 18-yard-box.

Thomas Henry levelled things up in the 48th minute before Osimhen missed a great chance with a left-footed shot two minutes later.

The Super Eagle was booked for a bad foul in the 54th minute before Piotr Zielinski put Napoli ahead again one minute later.

Stanislav Lobotka and Matteo Politano added the icing to the cake with the latter's goal being assisted by Osimhen.