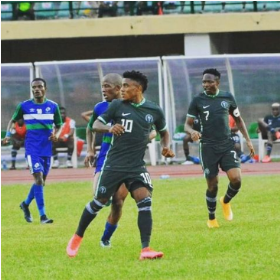 The agreement between CR Belouizdad and the Tunisian giants will keep Iwuala at the Algerian club until the end of the 2022-2023 season.

Iwuala joined Esperance a year ago from Enyimba and scored three goals in thirty appearances in his first season in Tunisia.

On his curriculum vitae, he has also worn the colours of Kada City and Delta Force in the past.

Anayo made his Nigeria debut off the bench in a 2021 Africa Cup of Nations  qualifier against Republic of Benin and has five caps to his his name, the last of which he earned in an international friendly against Mexico on July 4, 2021.

CR Belouizdad are competing in the CAF Champions League preliminary round by virtue of winning last season's Algerian topflight.

CR Belouizdad have signed  a versatile player who is capable of playing on the left and right wings, attacking midfield and as a striker.