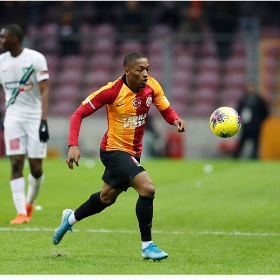 Through their official Twitter account, Turkish Super Lig giants Galatasaray have announced that Nigerian winger Jesse Tamunobaraboye Sekidika's contract with the club has been mutually terminated.

Sekidika becomes the second Nigerian player to depart Galatasaray this summer, after Super Eagles central defender Valentine Ozornwafor, who switched to Sporting Charleroi permanently before he was loaned out to Sochaux for the 2022-2023 season.

Signed from Eskisehirspor in January 2020, he departs the Lions with nineteen appearances for the club.

Sekidika would be best remembered at Galatasaray for scoring the club's 500th goal in official matches at the Türk Telekom Stadium.

The Brooke House College product played for AD Oeiras, Benfica and Napredak Kruševac before moving to Turkey in the summer of 2018.

Galatasaray have three points from the first two matches of the 2022-2023 season after beating Antalyaspor and losing to Giresunspor.