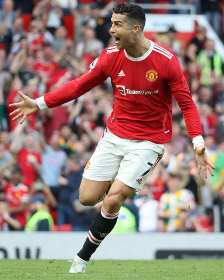 Former African Footballer of the Year Victor Ikpeba has opined that Manchester United should let  Cristiano Ronaldo leave the club if he is no longer interested in playing under manager Erik ten Hag.

Ronaldo reported late for the Red Devils pre-season preparations because of family issues but would later make a 45-minute appearance against Rayo Vallecano before the season kicked off.

Several media including Sky Sports UK indicated that the Portugal legend was keen to leave the club despite having one season left on his two-year contract.

"You know I have been bashed by the Manchester United fans last season. Don't think Cristiano Ronaldo was a distraction at United," Ikpeba said in response to a question on Supersport's magazine show, Monday Night Football, monitored by allnigeriasoccer.com.

"Yes he scored 18 league goals but he wants to go. The player doesn't want to be part of the team anymore," Ikpeba insisted.

Speaking on the 4-0 humiliating defeat suffered by United against Brentford, Ikpeba said the team had no chance of winning.

"There was no solution against this Brentford side, that was the reality. United don't have it and that's the truth.

"So Eric ten Hag, his work is cut out because it is a difficult job to take. He was warned not to take the job by former United coach Van Gaal.

"So much problem with Ronaldo and Maguire, so much problem going on. They have to come back and play as a team," the 'Prince of Monaco' noted.