...the complete Nigerian football portal
Subscribe
'He's a player for the future' - Tottenham manager gives his thoughts on the signing of Udogie
Published: August 18, 2022 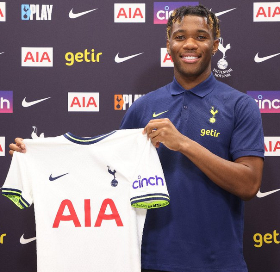 Tottenham Hotspur manager Antonio Conte has given his thoughts on the signing of Italy U21 international of Nigerian descent Destiny Udogie.

Udogie inked a multi-year contract with the north London club this week and will be spending the remainder of the campaign on loan at Udinese.

Although Udogie is already playing topflight football for one of the clubs in the big five European Leagues, Conte pointed out that the left-back is still developing as a player.

Tottenham made the best decision shipping him off on loan to Udinese, where he is guaranteed game time.

Speaking at Thursday's pre-match press conference before the Premier League meeting with Wolverhampton Wanderers, Conte was quoted as saying by Football. London : "You said it well, he's a player for the future. I think he is a good prospect for Tottenham because we are talking about a young player.

"For sure this player needs to develop like Spence and in my opinion a good investment for the club. Now he continues to play in this season with Udinese and in this way he has the possibility to play regularly.

"He has to develop and to grow with a group of players with more experience."

Udogie made his senior debut for hometown club Hellas Verona in a Serie A clash against AC Milan in November 2020 and has since played a total of 44 games as a professional, including 37 for Udinese.