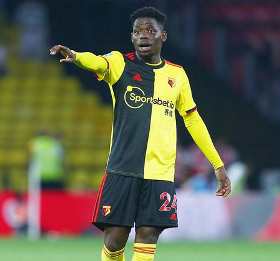 Super Eagles winger Samuel Kalu and Nigeria U23 international Tom Dele-Bashiru have both been ruled out of Watford's upcoming Championship clash against Preston North End at Deepdale (Preston).

The official website of the Hornets has provided a squad update before the matchday five fixture and explained why the duo are not available for selection.

Kalu is making progress on his recovery from a hamstring problem that has forced him to miss all the games played by Watford in the new season.

Midfielder Tom Dele-Bashiru has yet to make his season debut because he is recovering from a knee ligament injury suffered earlier this month, that will see him out of action for two or three months.

The Manchester City academy product, who had been pushing for a starting spot after a great pre-season, suffered the injury in training.

William Troost-Ekong, Maduka Okoye and Joseph Hungbo are the other Nigerian players in Watford's first team ranks but they have found game time difficult to come by after the first four matches of the 2022-2023 campaign.

Watford's draw vs Birmingham City in their last Championship game on Tuesday saw them extend their unbeaten start to the new season to four.