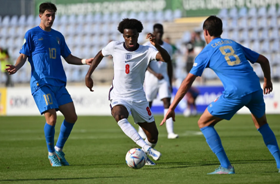 Premier League giants Chelsea confirmed on Friday that they have completed the signing of Cesare Casadei from Inter Milan.

The promising teenager has put pen to paper on a six-year contract that will keep him at Stamford Bridge until the end of the 2027-2028 season.

The Blues are planning for the future and part of their transfer strategy this summer is to invest in younger talents.

A central midfielder by trade, Casadei is the fourth notable 2003-born player to join Chelsea this summer, after Eddie Beach, Omari Hutchinson and Carney Chukwuemeka, who were snapped up from Southampton, Arsenal and Aston Villa respectively.

A key member of the Italian squad to the 2022 European U19 Championship, he is considered one of the brightest prospects in his homeland.

Chelsea's Head of youth development Neil Bath said: "Cesare is a player we have tracked for some time and we are delighted that he has now agreed to join Chelsea, where he will initially strengthen our Under-21s squad.

"He is another exciting emerging talent who we are looking forward to seeing develop and progress further as he breaks into senior football in the coming years."