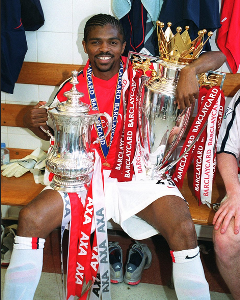 The English Premier League is celebrating its 30th anniversary and allngeriasoccer.com's Izuchukwu Michael here presents the outstanding Nigerian players in each playing position that have shone since the Premier League era in 1992 in a preferred 3-4-3 formation.

Not many Nigerians have played as goalkeeper in the entire football pyramid in England but our place for the goalkeeper goes to Carl Ikeme on honorary grounds.

Ikeme won promotion to the English Premier League in the 2017/18 season from the Championship but his battle against leukemia denied him the chance to show his talents in the EPL the following season and ultimately missed Nigeria's 2018 World Cup appearance. Ikeme has only one Premier League appearance to his name.

The former Marseille right back had a relatively good World Cup in 2002 hosted by Korea and Japan and was quickly snapped up by Everton manager David Moyes.

The Super Eagles defender went throughout the 2002/2003 season without missing a single game for the Toffees.

The member of the Japan 93 FIFA U-17 World Cup winning Golden Eaglets as well as the 1996 Olympic God medal winning Eagles is definitely assured of a place in the team.

The Nigerian won the FA Cup with Chelsea in 2000.

Babayaro swapped Chelsea’s blues for Newcastle black and white in 2005.

Many Nigerian fans remember with fondness his time at the Milan clubs, AC Milan and Inter Milan, especially at the latter but West was also in the Premier League with Derby County.

The effervescent West did not achieve any significant gains at the club but aside Yobo is the biggest Nigerian name who is full fledged international to have played in central defence. 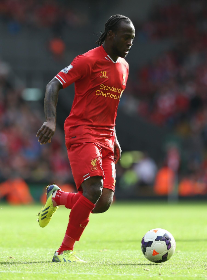 Taking his place on the wingback role is former Nigeria international Victor Moses.

Moses was one of the Chelsea players most endeared to former manager Antonio Conte who is now the boss at Tottenham Hotspur.

Moses had stints at Wigan Athletic and Liverpool but it was at Chelsea that he felt the warmth of a loving coach who was like a father.

Conte converted the forward to a right wing back in his famed 3-4-3 formation and he was part of the title winning side in the 2016/2017 campaign. 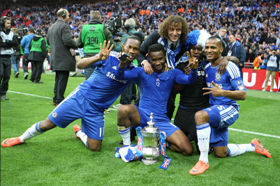 John Obi Mikel won the UEFA Champions League and UEFA, Europa League at Chelsea, going on to become one of the most influential players at Stamford Bridge under several world class managers.

At club level, he is Nigeria's most decorated player in Europe albeit when international football at youth levels are considered in the equation, Nwankwo Kanu has a thing to say about it.

Ndidi arrived at the club a season after Leicester 'miraculously' won the Premier League and his defensive stats as a shield in front of the backline has been one of the best for a defensive midfielder in recent memory.

In the last transfer window, Ndidi was, linked to big clubs like Manchester United, Arsenal and Real Madrid.

Austin Jay Jay Okocha takes up the creative midfield role for the Nigeria XI where he thrilled Premier League faithful with his flamboyant brand of football.

Okocha playing for Bolton Wanderers didn't win any medal at Reebok but he made lasting impressions on teams and many players and managers alike.

Kanu who won the 1996 and 1999 African Footballer of the Year awards went on to win the Premier League with the Invincible sides in the 2003-2004 season and also won two FA Cups.

At West Brom, 'Papilo' did not achieve any significant feat but when he moved to Portsmouth, along with friend and international teammate, John Utaka, they were the stars at Pompey that went on to lift the FA Cup in May 2008.

Portsmouth defeated Cardiff 1-0 in the final with Utaka scoring the only goal which was assisted by 'king' Kanu.

Yakubu Aiyegbeni, simply called Yakubu by the English commentators is the highest scoring Nigerian in the English Premier League with 95 goals in 252 league appearances.

Yak played for Middlesbrough, Portsmouth, Everton and Blackburn Rovers. What was also impressive was his defensive shift for his teams.

However sadly, Nigerian fans remember him for missing a goal in front of an open met in the 2010 World Cup in South Africa.

Obagol scored Birmingham City's winning goal in their League Cup win against Arsenal in 2007 to deny the Gunners what might have been breaking of a title jinx since the 2004/2005 season.

Newcastle United also had the spectacular goals and backflips of Obafemi Martins at Saint James Park to savour. He would later play in the MLS.