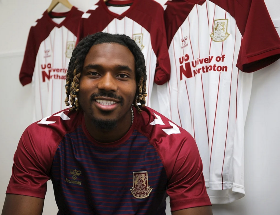 Through a statement on their official website, English Football League side Northampton Town have announced the signing of Leicester City's Belgian-Nigerian centre-forward Josh Eppiah on loan for the remainder of the season.

Eppiah has returned to the Cobblers for a second spell, having spent the second half of last season on loan at the Sixfields Stadium.

Eppiah is behind Jamie Vardy, Kelechi Iheanacho and Patson Daka in manager Brendan Rodgers' pecking order of strikers at the King Power Stadium and has been loaned out for a third time to aid his development.

The striker enjoyed a loan spell in the Jupiler Pro League with OH Leuven during the 2020-2021 season.

Had he stayed back at the Foxes, the 23-year-old can only feature in the Premier League 2 as an overage player.