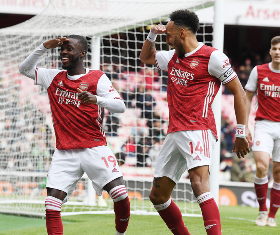 The deal which takes the 27-year-old back to France doesn't include an option to buy.

According to Sky Sports, the last details of the deal will be finalized in the next 48 hours.

Pepe joined Arsenal in the summer of 2019 for a club record fee of £72 million from French Ligue 1 giants Lille OSC and has gone on to appear in 112 matches and scored 27 times.

The Ivorian will not have any problem adapting the French topflight as he has flourished in the league previously.

Before leaving Lille OSC for Arsenal in 2019, he scored 37 goals and assisted 18 goals in 79 appearances.

He has also turned out for Angers SCO in the French Ligue 1.

The Gunners are reportedly interested in signing the 22-year-old from fellow Premier League side Wolverhampton Wanderers.