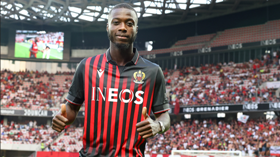 Nicolas Pépé's return to the French Ligue 1 is done and dusted, with both Arsenal and OGC Nice confirming the transfer of the Ivory Coast national teamer on their official websites.

The 27-year-old, the most expensive African player in history at 72 million pounds, has joined the four-time French champions on loan for the remainder of the 2022-2023 campaign with no purchase option include in the agreement.

Pépé knows all about the Ligue 1, where he first made his name, having represented Angers SCO and Lille in the past, scoring 38 goals and registering 17 assists combined for both clubs in the top division.

Immediately after his loan move to OGC Nice was confirmed on Thursday, he was presented to the fans of the club before their Europa Conference League match against Maccabi Tel Aviv.

The winger has made a total of 111 appearances for his parent club Arsenal, notching 27 goals.

With Pépé's temporary move to OGC Nice, two other African-origin players in Bukayo Saka and Eddie Nketiah are the top scorers in the current Arsenal squad with 23 goals each.