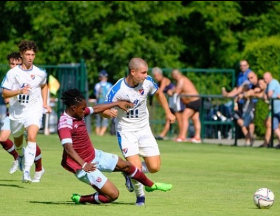 Allnigeriasoccer.com can exclusively report that West Ham youth teamer Tyron Akpata has chosen to pledge his international future to Nigeria over England.

The central midfielder has made himself available to play for the Golden Eaglets ahead of the 2023 U17 Africa Cup of Nations holding in Algeria next April.

Aged sixteen, Akpata signed scholarship forms with the Hammers last month, a deal that will keep him at the club until the end of the 2023-2024 season, after his brilliant displays for the U16s last season caught the eye of the youth team coaching staff.

He has been described by his minders as a combative midfielder blessed with a good range of passing, distributes the well and he's a strong tackler.

The left-footed midfielder also has flair in his game which did not go unnoticed during Tuesday's London Cup match between West Ham and Leyton Orient.

In the new season, Akpata was involved in the opening two matches played by West Ham in the U18 Premier League, helping them pick up six points.

West Ham Academy product Daniel Jinadu was the Golden Eaglets first choice goalkeeper at the 2019 FIFA U17 World Cup, and Akpata is now hoping to follow in his footsteps by being provisionally cap-tied to Nigeria.