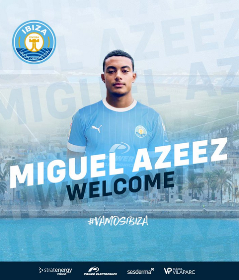 With a statement on their official website, Arsenal have confirmed that Anglo-Spanish-Nigerian midfielder, Miguel Azeez will go on loan to UD Ibiza.

Azeez joins the La Liga 2 club on a season long loan in search of experience as a professional footballer.

According to the 14-time Emirates FA Cup winners, the loan deal is subject to the completion of regulatory processes.

The 19-year-old spent the first half of last season on loan at Portsmouth in League One, before returning to play youth football at Arsenal.

This will be Azeez's second loan move away from Arsenal, and he will be hoping to have a better loan experience than he had at Pompey.

The Hale End Academy product made his first team debut for Arsenal in December 2020 against Dundalk in the UEFA Europa League.

Mikel Arteta handed Azeez the opportunity to train with Arsenal's main squad on numerous occasions during the last campaign.

Ibiza are sitting in 19th place on the 22-team log, with a point from three games played in the La Liga Smart Bank.