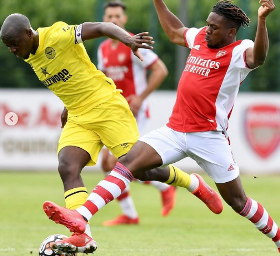 Through their official website, Arsenal have confirmed that Kogi-born defensive midfielder Tim Akinola has joined National League club Chesterfield on loan for the remainder of the 2022-2023 season.

This is his second loan spell away from the Emirates Stadium since joining the Gunners in the summer of 2020, having spent the second half of last season at Scottish outfit Dundee United.

Akinola's loan spell at Dundee United was cut short due to a serious ankle injury he suffered, which required surgery.

His injury problems are over as he went the distance in the EFL Trophy clash against Cambridge United on Tuesday, and has also featured as a substitute in the Premier League 2 in the new season.

He played for the youth teams of Lincoln City and Huddersfield Town prior to his move to Arsenal.

Akinola has been described as a  'tireless defensive midfielder with strong technical qualities'.