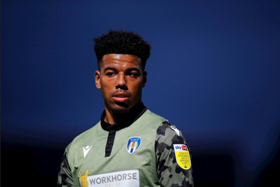 The Fulham-owned player will be spending the remainder of the 2022-2023 season on loan at The Pirates.

This is his third loan move since joining Fulham in 2012, having previously spent time on loan at Colchester United and Hibernian.

A Bulgaria U21 international, Jasper has made three appearances for Fulham's first team since making his professional debut against Manchester City in an Emirates FA Cup clash in January 2020.

The 20-year-old played eighteen games in the League Two during his loan spell with Colchester United, scoring two goals and registering two assists, and was in action for 955 minutes.

Speaking to the official website of Bristol Rovers, manager Joel Barton stated : "It’s no secret we’ve been in the market for wide players and Syl fits the profile of what we’ve been looking for.

"He’s a young, hungry, dynamic winger and I hope he will excite our fans with his style of play."

Jasper has been assigned the number 11 jersey at Bristol Rovers ahead of a possible debut against Morecambe on Saturday, September 3.

London-born Jasper is eligible to represent the Super Eagles through his Nigerian father.