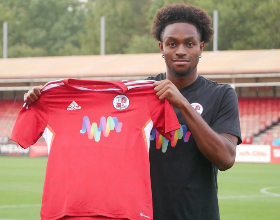 Aston Villa have loaned out the talented Anglo-Nigerian striker to the Red Devils and the loan deal comes with an obligation to buy him outright.

Caleb Chukwuemeka is the third Nigeria-eligible player signed by Crawley Town in the summer transfer window, following in the footsteps of Hale End Academy graduates Tobi Omole and Mazeed Ogungbo.

Chukwuemeka knows the Football League to an extent as he played 22 games in the League One for Northampton Town but only two as a starter and the rest off the bench as a substitute.

The 20-year-old spent the second half of last season at Scottish Premiership outfit Livingston, where he made eight appearances in the topflight and played a game in the Scottish Cup.

He has made one appearance for Aston Villa's first team and it came in a Carabao Cup match against Barrow, coming off the bench to replace his younger brother Carney with seventeen minutes left.

Chukwuemeka was named Premier League 2 Player of the Month for September 2021.