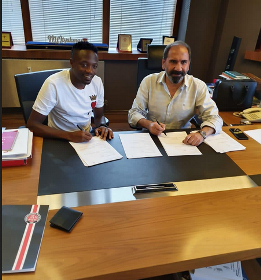 Allnigeriasoccer.com understands that Ahmed Musa's transfer to Turkish Super Lig club Sivasspor is done and dusted, with only an official confirmation of the deal pending.

Shortly after parting company with Fatih Karagümrük by mutual consent on Friday, the Nigeria captain and his intermediary traveled to Sivas to formalize his transfer to Sivasspor.

Musa has put pen to paper on a multi-million euro two-year contract with Sivasspor valid until the end of the 2023-2024 season.

Sivasspor are now racing against time to register their marquee signing of the summer transfer window for the group stage of the UEFA Europa Conference League.

Sivasspor must include Musa's name on the Europa Conference League roster by midnight CET on Friday 2 September or he won't be eligible to play in the group stage.

Having made appearances for CSKA Moscow and Leicester City in the Champions League and the Army Men in the Europa League, Musa is a seasoned European campaigner.