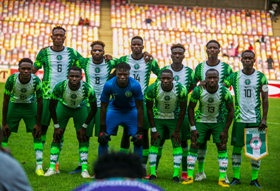 The Super Eagles again have missed out on qualifying for the African Nations Championship after losing on penalties to the Black Galaxies of Ghana at the MKO Abiola National Stadium in Abuja on Saturday evening.

Nigeria have not participated in the competition since 2018 when they finished runners-up, missing the 2020 edition and will now miss out on the second consecutive tournament - Algerie 2022.

The Nigerian side were defeated 2-0 last week by their adversaries at the Cape Coast stadium but they rallied to win win 2-0 with goals from Zilkifilu Mohammed and Chijioke Akuneto in 90 minutes in the return leg to take the tie to penalty shootout.

The Super Eagles attack went for early bombardments into the opposition box but the Ghanaian defence remained resolute.

The Eagles went close to opening the goal account and put the Black Galaxies under immense pressure but a good shot hit the side netting in the 26th minute.

Despite the best efforts of the home-based Super Eagles , the first half ended scoreless.

Zilkifilu Mohammed however scored for the Eagles in the 76th minute to restore Nigeria's hopes of a comeback.

Chijioke Akuneto made it 2-0 and 2-2 on aggregate four minutes into added time to take the contest into penalty shootout.

The Ghanaians prevailed 5-4 on penalties to qualify for the African Nations Championship in Algeria.