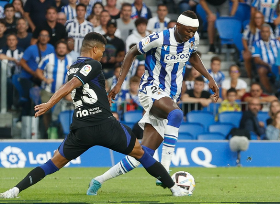 Super Eagles forward, Sadiq Umar had a night to remember as he scored on his debut for Real Sociedad.

Sadiq netted Real Sociedad's equaliser in the 1-1 draw with Atletico Madrid at the Estadio Anoeta on Saturday evening.

Sociedad had gone behind following Alvaro Morata's opener for Atletico Madrid in the fifth minute.

Morata went on to double the Madrid based team's lead in the 32nd minute but his goal was disallowed following the intervention of the Video Assistant Referee.

At halftime, the hosts went into the tunnel trailing 1-0.

The second half resumed with Sadiq coming on for Alexander Sørloth.

Sociedad continued to push for an equalizer, intensifying their efforts by taking control of the game.

Sadiq would go on to restore parity for his new employers in the 55th minute, nine minutes after entering the fray.

Mohamed Ali Cho whipped in a cross to the far corner, with Sadiq directing the ball with his head.

Both sides pushed for a winner but no one could get the three maximum points.

In the provisional standings, Real Sociedad are in eighth place with seven points from four games.