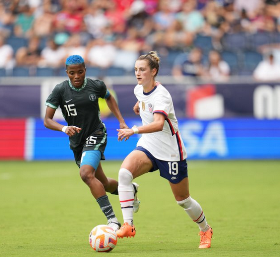 Nigeria on Saturday evening were defeated 4-0 by the USA women's national team in the first leg of their two-legged friendly matches of the United States at the Children's Mercy Park, Kansas City.

The Super Falcons have now lost three consecutive games, having been defeated by Morocco and Zambia in their last two matches of the 2022 Africa Women Cup of Nations.

United States and Nigeria are using the games as preparations for the 2023 FIFA Women's World Cup in Australia and New Zealand.

Chiamaka Nnadozie made a great save in the 4th minute to keep the hosts at bay early in the game.

The Falcons threatened to score four minutes later through Ifeoma Onumonu who collided with the USA goalkeeper. The Nigerian striker needed medical attention.

Despite the early promise shown by the Falcons, USA scored in the 13th minute through Smith.

In the 22nd minute, Monday Gift went close to equalising but her long range strike was saved by US keeper, Naeher.

It soon became 2-0 for USA when Horan finished superbly in the 26th minute.

With 10 minutes before the break, Morgan was denied by Nnadozie in Nigerian goal before the woodwork came to the rescue of the Nigerians when Horan went close afterwards.

Centre-back Osinachi Ohale was booked for a rather poor challenge on USA's Smith in the 40th minute.

Two minutes into added time,United States got their third goal of the game through Smith who got her brace.

In the 54th minute, Alex Morgan converted from the spot kick for USA's fourth goal of the evening.

Super Falcons head coach Thomas Derneby made raft of changes and there was somewhat improved passage of play after the former African champions went 4-0 down albeit there was a head injury scare for Ohale.

Michelle Alozie forced the USA goalkeeper to a wonderful save as the Falcons surged forward in search of some redemption.

Christy Ucheibe was stretchered off 10 minutes to full time after a bad tackle from her marker to reduce the Falcons to 10 players on the field.

There was five minutes of additional time at the end of 90 minutes.

Alozie delivered another powerful shot but it was saved by the USA goalkeeper.

The Falcons were well beaten but they had an improved performance towards the end of the game.