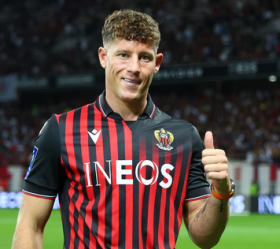 With a statement on their official website, French Ligue 1 club, OGC Nice have announced the signing of Ross Barkley on undisclosed terms.

OGC Nice have pulled off a massive transfer coup by luring the England international to France as he was linked with possible moves to clubs in the Premier League and Scottish Premiership.

Barkley joins the Eaglets on a free transfer following his contract termination at Chelsea.

The attacking midfielder joined Chelsea in January 2018 from Everton. He scored 12 goals in 100 appearances for the London based club.

Barkley, who is of Nigeria descent, becomes teammates with Kasper Schmeichel and Aaron Ramsey who were both household names in the English topflight.

On his curriculum vitae, he has worn the colours of Leeds United, Sheffield Wednesday and Aston Villa.