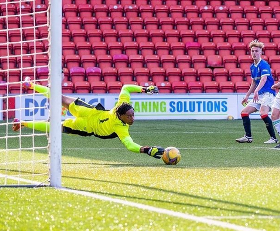 The official website of UEFA has confirmed Glasgow Celtic's UEFA Youth League roster ahead of their opening match in Group F against 2020 champions Real Madrid.

The young Hoops will also face FC Shakhtar Donetsk and RB Leipzig in the group stage.

Celtic U19 coach Stephen Mcmanus will be able to call upon the services of Tobi Oluwayemi for this afternoon's clash against Los Blancos even though the goalkeeper is not age-eligible for the UEFA Youth League.

For the 2022-2023 UEFA Youth League, players are eligible to play in the competition if they were born on or after 1 January 2004 and that rule means Bosun Lawal, one of the standout players for Celtic B, misses out on the squad.

2003-born glovesman Oluwayemi has been registered as an overage player on the Celtic roster which contains four goalkeepers,

Tobi, younger brother of 2021 Super Eagles invitee Joshua Oluwayemi, has been assigned the number 71 jersey for the UEFA Youth League.

He has been on the books of Celtic since February 2019 following his transfer from the academy team of Tottenham Hotspur.