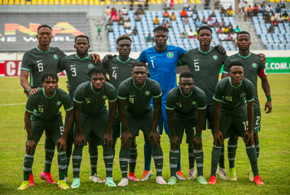 Former West Bromwich Albion defender and Nigeria international Ifeanyi Udeze has leapt to the defence of the home-based Super Eagles Team B that failed to qualify for the 2023 African Cup of Nations Championship in Algeria by insisting that the Nigeria Professional Football League (NPFL) has quality players to play in the team coached by Jose Peseiro.

The Salisu Yusuf-led side  overturned a 2-0 first leg deficit to force the contest to penalty shootout but the Nigerian side lost 5-4 after the spot kicks after missing one of their efforts from 12 yards.

Udeze speaking on Brila FM  Lagos on Tuesday backed a remark made by former Super Eagles goalkeeper Ike Shorunmu that the NPFL have quality players good enough to play under José Peseiro.

Attention has shifted to the September 27 international friendly against  former African champions Algeria in Oran amid fears that the home-based Eagles may not make the cut.

"If the home based Super Eagles didn't win the reverse leg of their 2023 African Nations Championship qualifier 2-0 in Abuja, I would have said that there's no good player in the Nigeria Professional Football League (NPFL)," Udeze stated.

"But I support what (goalkeeper trainer of the team) Ike Shorounmu has said. Nigerians should not give up on the home-based Eagles players and also conclude that the home-based players are not good enough for the Super Eagles Team A."

Udeze attributed the eventual defeat of the Nigerian side to due to ill-luck.

"The CHAN Eagles lost eventually on penalty shootout which is a 'lucky game' if you like. What matters was that the Eagles canceled the 2-0 deficit.

"It's just unfortunate that they could not qualify for the 2023 CHAN no thanks to missing one of their spot kicks," Udeze noted.

The home-based Eagles have thus failed to qualify for two consecutive CHAN tournaments.