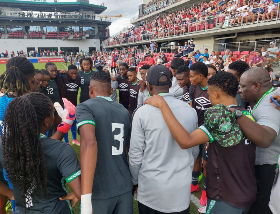 The Super Falcons rounded off their two-game friendlies in the USA against the world's leading women's football team United States in the wee hours of Wednesday, September 7.

Allnigeriasoccer.com presents the four things noticed in the game after 90 minutes :

Centre-back Blessing Dehemin conceded an own goal with 25 minutes played in the second leg of the friendlies.

That has naturally led to most cynics believing that she could continue to falter in that direction after similar error led to the Netherlands' goal against the Super Falconets.

Aside the second USA goal, the Super Falcons goalkeeper Chiamaka Nnadozie was otherwise impressive in the game.

Nigeria have never beaten the USA in a major international match in eight attempts.

When Uchenna Kanu scored in the 50th minute, it ended a 22-year long scoreless streak against the Americans, dating back to Mercy Akide's goal on Sept 20, 2000 at the Olympic Games.

Another great performance by the Tigres UANL striker. Uchenna Kanu was a halftime substitute in the game.

The team needs to rally round players with managerial skills, and Kanu is deserving of a starting spot in the team.