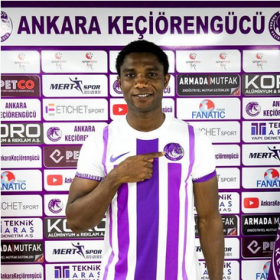 Eze has transferred to Ankara Keçiörengücü from Qatar Stars League side Al-Ahli SC.

He is best know for his spell in Serbia with Mladost Lučani, where he won the top scorer award in the Serbian SuperLiga for the 2014-15 season with 15 goals and was named in the Team of the Season.

A product of Zamfara United in his homeland, he also previously played for Africa Sports and Ajiya Babes .

Ankara Keçiörengücü are fourth in the 1. Lig with seven points accumulated after four matches.