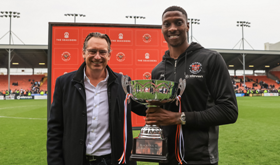 The Northwest Football Awards was launched to celebrate the region's brightest and best in the game, paying tribute to and recognizing those who have achieved footballing excellence both on and off the pitch.

Former Flying Eagles defender Ekpiteta is up for the Championship Player of the Season trophy and faces competition from Blackburn's Ben Brereton Diaz and Preston's Andrew Hughes to win the award, which is decided by public vote.

The 27-year-old had a banner 2021-2022 campaign, winning Blackpool's Player and Players' Player of the Season for his performances.

Ekpiteta started 39 of the 46 matches Blackpool contested in the Championship last season, scoring five goals from his defensive position.

Bolton Wanderers winger Afolayan is a contender for the League One Player of the Season .

The former Chelsea schoolboy netted fourteen times and provided seven assists in fifty-one appearances across all competitions in 2021-2022.

Afolayan has been shortlisted for the League One Player of the Season along with Sean McConville (Accrington Stanley), Alex Cairns (Fleetwood Town), Cole Stockton (Morecambe) and Will Keane (Wigan Athletic).

The 2022 Northwest Football Awards is scheduled to hold at the Emirates Old Trafford on November 7.