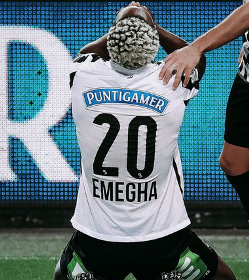 Three attack-minded players of Nigerian descent were on target for their respective clubs in league matches on Sunday, September 11.

In a Danish Super Liga match at the Brøndby Stadion, summer signing from Red Star Belgrade Ohi Omoijuanfo made it two goals in as many games for his new employers Brondby after scoring in a 2-2 draw with Tosin Kehinde's Randers.

On his home debut, Omoijuanfo needed fifty four seconds to open the scoring but he had to leave the pitch in the 20th minute after suffering a knock.

Moses Simon's goal counted for nothing as Nantes were beaten for the third time this season, losing 3-2 to Lorient in a French Ligue 1 match at Stade Yves Allainmat - Le Moustoir.

Five minutes from time, the Nigeria international pulled one back with an effort from outside the box, taking his tally to three goals this term.

Simon had missed the last two games before the trip to Lorient due to injury.

Netherlands U19 international Emanuel Emegha continued his fine start to the season by scoring and providing an assist in SK Sturm Graz's 2-0 win at SK Austria Klagenfurt.

In the fourth minute of stoppage time, Emegha received the ball at the halfway line, embarked on a run before slotting past the goalkeeper.

The 19-year-old has directly participated in six goals from ten all-competition appearances this season.