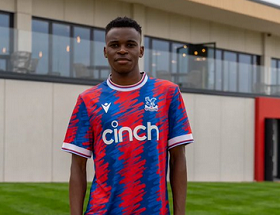 With a statement on their official website, English Premier League club Crystal Palace have announced the signing of Nigerian left-back Kelvin Agho for the academy team.

The promising defender completed his move to the Eagles on deadline day and will spend the remainder of the 2022-2023 season on loan at STK 1914 Šamorín in Slovakia.

The official webpage of STK 1914 Šamorín describes him as a 'left-footed all-rounder, who plays on the wing or in attack, but can also play as a full-back'.

STK 1914 Šamorín were interested in signing Agho on a permanent deal but he was not yet eighteen so they could not bring him to Slovakia, before missing out on his signature to Crystal Palace.

The Slovakian second tier club scouted Agho before he was signed on loan, with their coaches traveling to England to watch him in action.

Speaking on the signing of Agho, ŠTK sports director Csaba Horváth stated : "He was noticed at Crystal Palace and when such a club comes to the fore, the players usually take advantage of such an opportunity.

"Kelvin is at the start of his journey which could lead to the Premier League, so he needs to play. We have been in contact with his agent since the spring, with whom we agreed that Kelvin could come to Šamorín on loan.

"He is a player with potential, which is not often found in our country, so I think that he will enrich our team with something again."

Šamorín are finalizing the visa requirements associated with Agho's trip to Slovakia.