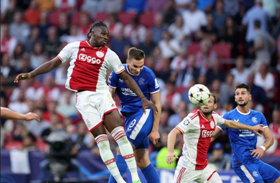 Calvin Bassey has admitted that Ajax Amsterdam's victory over Glasgow Rangers on matchday one of the UEFA Champions League was bittersweet.

The Super Eagles left-back shone as the Dutch champions thrashed Rangers 4-0 last week and the highlight of his performance was providing the assist for his team's third goal.

Bassey has fond memories from his time at Rangers, with whom he won the Scottish Premiership in 2020-2021, the Scottish Cup the following season and reached the final of the Europa League.

Having put himself in the shop window, the versatile defender made a big leap in his career by moving to another traditional European club in the summer transfer window.

The 22-year-old became Rangers' most expensive outbound transfer in history when he joined Ajax for a guaranteed fee of 23 million euros and if variables are included, the total amount could rise to 26.5 million euros.

"I consider the Rangers FC players to be my friends," Bassey told Het Parool, via Ajax Fanatics.

"I played with them for two years, shared joys and sorrows. And it is not easy to hurt friends so much. But for me personally, and my family, it was a beautiful evening."

Bassey faces one of the biggest tests of his young career on Tuesday evening when Ajax Amsterdam face Liverpool at Anfield.