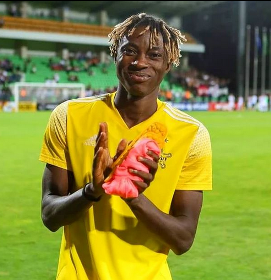 FC Sheriff Tiraspol's Nigerian striker Rasheed Akanbi was on media duties on Wednesday afternoon before the Moldovan giants face off with Manchester United in the UEFA Europa League.

Known for his speed and trickery down the left flank, Akanbi has been one of Sheriff's standout performers this season with seven goal involvements (5 goals, 2 assists) in fourteen matches.

Last season, Sheriff caused a sensation by beating eventual winners Real Madrid at the Bernabéu and they have started their Europa League campaign on a good note, thrashing Francis Uzoho's Omonia Nicosia 3-0 on matchday one in Group E.

The Red Devils are on a good run of form in the Premier League with four consecutive wins but were beaten 1-0 by Real Sociedad in their Group E opener last Thursday.

At the pre-match press conference, Akanbi spoke about the game against Manchester United, being one of the leaders in the Sheriff side and namechecked the clubs and players he wants to face in Europe.

Below you can read every word he said :

What are your thoughts on tomorrow's game?

"The game against Manchester United is good for us. It's good for FC Sheriff that we have tough opponents like this and are going to do our best because I always believe in everybody. I believe in my team, I believe in the coach's tactics. We train for it, everyday we give one hundred percent then we have to give 100 percent tomorrow also, then we have a positive result."

After the last games it looks like you have become the leader for the team and for the fans as well. How do you feel on this role?

"First of all I'd say we are together because without my teammates I cannot do it alone and it doesn't matter Manchester United or any team that come our way. I want everyone to know that we are Sheriff so we have to keep believing in ourselves, we have to keep moving, we have to improve ourselves.

"What the coach is telling everybody we have to keep doing it 100 percent. I feel  good, I feel blessed and we have to do it together."

Against who do you want to play personally in the future games?