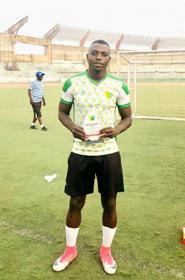 Allnigeriasoccer.com understands that Armenian giants FC Ararat-Armenia are on the verge of announcing the signing of promising Nigerian striker Jesse Banga Akila.

Ahead of the close of the summer transfer window in Armenia, Akila has put pen to paper on a three-year contract with FC Ararat-Armenia valid until June 2025.

Though Akila is uncapped at international level, it is believed that he is a player of interest to Super Eagles manager Jose Peseiro, with the Portuguese scouting him in a Nigeria Professional Football League match between Akwa United and Plateau United in June 2022.

Described as a powerful attacker, he was a fan favourite at Plateau United last season due to his skills and work rate.

FC Ararat-Armenia extensively monitored Akila before offering him a contract.

He's hoping to follow in the footsteps of another Nigerian attacker Yusuf Otubaanjo who was the top scorer in the Armenian Premier League for the 2020-2021 season while wearing the colours of FC Ararat-Armenia.