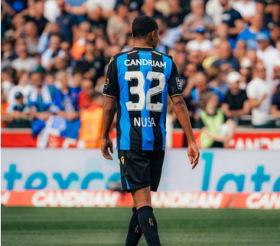 Club Brugge striker Antonio Nusa became the youngest ever Nigeria-eligible player to feature in the UEFA Champions League in the 21st century when he debuted for the Belgian Pro League champions in their 4-0 rout of Zaidu Sanusi's FC Porto on Tuesday evening.

The absolute Nigerian record is held by former Anderlecht defender Celestine Babayaro who was aged 16 years and 87 days old on November 23, 1994 when he made his Champions League debut against Steaua Bucharest.

Nusa was 17 years and 149 days when he came off the bench in the 75th minute against Porto and fourteen minutes later he became the youngest player to score on his Champions League debut.

Allnigeriasoccer.com can exclusively report that a number of unnamed top European clubs are monitoring the progress of the Norway youth international of Nigerian descent at Club Brugge but he's going nowhere.

The talented teenager has made a decision on his future and is focused on continuing his development at Club Brugge.

Nusa has decided to stay one to two more years with Club Brugge before even thinking about a transfer.

The former Stabæk Fotball wonderkid has made eight appearances for Club Brugge since landing in Belgium last August.