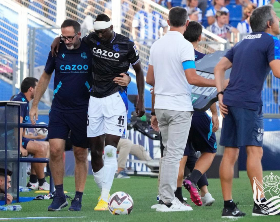 Sadiq suffered a right knee sprain during the first half of the La Liga match against Getafe and after tests were carried out he was diagnosed with a rupture of the anterior cruciate ligament in the right leg.

Today, Dr. Mikel Sánchez performed a ligamentoplasty with the tendons of the semitendinosus and internal rectus muscles to repair the rupture of the anterior cruciate ligament of the right knee and the operation was successful.

According to the medical update, Sadiq will remain admitted until tomorrow, Friday, or until Saturday, depending on the clinical evolution.

🏥 Sadiq underwent surgery this morning. The operation was successfully carried out with no issues. He will remain in the hospital until Friday or Saturday, depending on his evolution. #AurreraReala pic.twitter.com/yD3G9dni6k

The former Almeria man faces a minimum of six months on the sidelines and the recovery time could be extended to eight months, depending on his rehabilitation.

Sadiq was in good form before his injury, netting three goals in five appearances in the Spanish top flight.