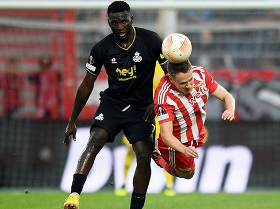 Nigeria-eligible footballers were in action in the second and third tier of UEFA competitions on Thursday night for their respective clubs.

Allnigeriasoccer.com takes a look at the outstanding individuals from the matchday two.

In the UEFA Europa Conference League, Peter Olayinka was involved in two goals for Salvia Prague in their 3-2 win over KF Balkani.

Olayinka restored parity for the hosts in the 34th minute following a delightful pass from Lukas Masopust.

In doing so, he became Slavia Prague's all-time best goalscorer in European competition.

The 26-year-old went on to turn provider in the 41st minute as he assisted Lukas Masopust to score the winner.

In the 36th minute, Otubanjo, a fringe member of the Golden Eaglets squad at the 2009 FIFA U17 World Cup, doubled the advantage.

In the UEFA Europa League, Victor Boniface found the net for Royale Union Saint-Gilloise in a 3-2 win over Malmo at the Stade Joseph Mariën.

Nineteen minutes from time, the 21-year-old scored what proved to be the winning goal.