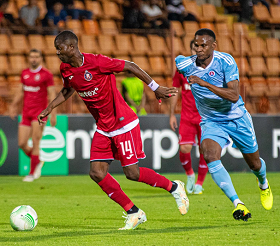 Former Nigeria youth international Yusuf Otubanjo has been nominated for the official UEFA Europa Conference League Goal of the Week for his brilliant strike in FC Pyunik's clash against ŠK Slovan Bratislava on Thursday night.

Yusuf, a member of the 2009 Golden Eaglets squad, has been named on a four-man shortlist.

Which goal was the best on Matchday 2? 👇@Heineken | #UECLGOTW | #UECL

In the 36th minute of the encounter, Yusuf received the ball from the opponent's half, went on to dribble past Uche Agbo and shot the ball into the top left corner of the net to make it 2-0.

This is Yusuf's second goal in a UEFA competition this term, having scored in the UEFA Champions League qualification match between FC Pyunik and F91 Dudelange.

The former Atletico Madrid youth teamer becomes the third Nigerian to be nominated for the award in the 2022/2023 UEFA Europa Conference League.