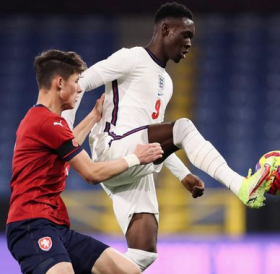 The English Football Association announced the Young Lions rosters on Friday ahead of international matches later this month, with six Nigeria-eligible players getting invites.

Red-hot Arsenal loanee Folarin Balogun has been named in the England U21 squad for international friendlies against Italy and Germany.

The Stade de Reims striker could be facing SC Freiburg goalkeeper Noah Atubolu and VfL Wolfsburg midfielder Felix Nmecha at Sheffield United's Bramall Lane on September 27, as both have been selected in Germany U21 squad.

For the U20 age group, five Nigeria-eligible players have been picked by manager Ian Foster for friendly matches with Chile, Morocco and Australia, as part of their preparations for the 2023 FIFA U20 World Cup.

The big news is that 2019 Golden Eaglets invitee Malcom Ebiowei has received his first call-up for England U20 national team and he's joined on the roster by 2022 European U19 champions Carney Chukwuemeka and Tim Iroegbunam, Southampton winger Sam Edozie and former Arsenal fullback Daniel Oyegoke.