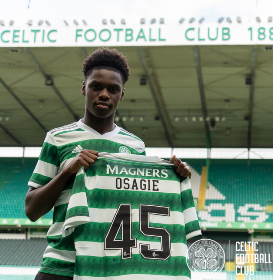 Allnigeriasoccer.com exclusively reported fifty-one days ago that Osagie has put pen to paper on a deal that will keep him at Parkhead until June 30, 2025 and the Hoops have confirmed as much, stating that he has signed a three-year contract.

Celtic have also confirmed that Osagie will initially start his career in Scotland with the B team, but should  be eligible to play for the senior side if required.

The 17-year-old has joined Celtic from the academy team of West Ham United, where he spent two years.

He arrives at Celtic with a huge reputation, having been linked with the likes of Arsenal, Chelsea, Tottenham Hotspur, Liverpool, Wolverhampton Wanderers and Brighton & Hove in the past.

This summer, Osagie was called up for a Republic of Ireland U19 training camp.

He links up with promising Nigeria-eligible youngsters Bosun Lawal and Tobi Oluwayemi at Celtic B.