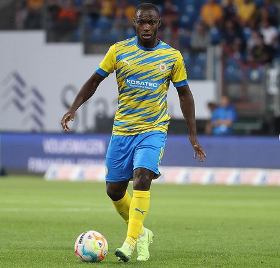 Anthony Ujah has been recognized for his outstanding performance in the last round of matches in the German 2. Bundesliga, with Whoscored.com naming the Nigeria international in its Team of the Week for week nine.

Written off after an unsuccessful stint at Union Berlin, Ujah is back in the limelight following his fine start to life at Eintracht Braunschweig.

The former Lillestrom man bagged a brace as Eintracht Braunschweig defeated Karlsruher SC 2-1 at the EINTRACHT-Stadion on Friday, taking his tally for the season to four goals from seven appearances.

A minute to the end of the first half, Ujah headed home a free kick taken by Immanuel Pherai and scored what proved to be the winning goal at minute 72.

The 31-year-old has now scored in three consecutive matches, something he last managed in 2015 during his time at FC Cologne.

Ujah earned a 9.7 rating for his performance against Karlsruher - the highest rated player in the Team of the Week.