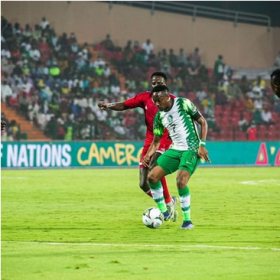 Ahmed Musa is set to become the second Turkish-based winger to withdraw from the Nigeria squad to face Algeria next week, after Adana Demirspor star Henry Onyekuru.

According to a medical bulletin issued by Sivasspor via social media, Musa has a fracture in his left arm, effectively ruling him out of the trip to Oran.

The 29-year-old was substituted in the nineteenth minute of Sivasspor's 2-1 loss to Ankaragücü in a Turkish Super Lig encounter at the Eryaman Stadyumu on Sunday evening.

Musa received treatment on the pitch but had to be taken off due to an injury to his left arm.

The club announced that the 2013 Africa Cup of Nations winner has begun his rehabilitation, but didn't state the time he will spend on the sidelines.

Musa joined Sivasspor in September 2022 on a free transfer, shortly after terminating his contract with Faith Karagümrük by mutual consent.

The pacy forward has played four matches in all competitions for Sivasspor and is yet to open his goalscoring account.

Watford striker Emmanuel Dennis and Sochaux central defender Valentine Ozornwafor were called in to replace injured duo Onyekuru and Leon Balogun respectively, and it remains to be seen whether the Nigeria Football Federation will adjust the roster again following the imminent withdrawal of Musa.

Musa has played over one hundred games for the Nigeria national team and has scored 16 times.