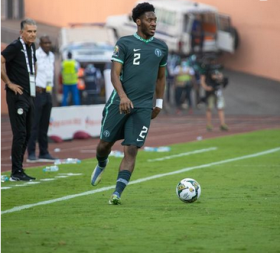 Eighteen of the players invited for the Super Eagles friendly against former African champions Algeria reported for international duty in the city of Constantine  on Monday, September 19.

According to a press release by the Nigeria Football Federation, Chelsea product Ola Aina, Arsenal-reared winger Alex Iwobi and former Chelsea central defender Kenneth Omeruo are among the players who have showed up for duty.

With the exception of Awaziem who was unavailable for selection due to an accumulation of yellow cards, all the aforementioned players were named in their respective clubs' matchday squads in the latest round of matches in the European Leagues.

Meanwhile, the Nigerian Federation have made another adjustment to the roster, handing late call-ups to Ebube Duru and Saviour Godwin to replace Samuel Chukwueze and Ahmed Musa respectively.

Duru and Godwin are among seven players yet to link up with the squad in Algeria, the others being Francis Uzoho, Adebayo Adeleye, Kelechi Iheanacho and Ademola Lookman.

18 players in camp ahead of first training session