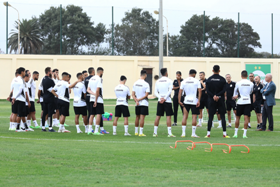 The Algerian Football Federation (AFF) have made an adjustment to the Fennec Foxes roster ahead of their upcoming friendlies against Guinea and Nigeria.

Manager Djamel Belmadi won't be able to count on the services of Hicham Boudaoui for the two games against the West African opponents.

The OGC Nice midfielder was substituted in the 46th minute of OGC Nice's 1-0 loss to Angers SCO at the weekend due to an undisclosed injury.

In order to compensate for the absence of Boudaoui, the Algerian Federation have handed a late call-up to Sofiane Bendebka, who plays for Saudi Professional Football League club Al Fateh SC.

The Algerian national team started preparations for the friendlies at the National Technical Center on Monday and are scheduled to travel to Oran on Tuesday.

The Super Eagles have had their own injury problems, with star striker Victor Osimhen not called up for the first international break of the season due to a muscle-related injury.

In addition, captain Ahmed Musa, Leon Balogun and Henry Onyekuru who were initially named in the squad have withdrawn due to injuries.