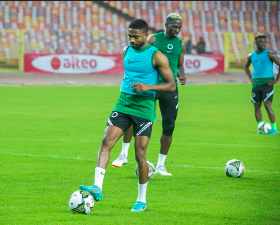 Nigeria manager Jose Peseiro has erased Emmanuel Dennis' name from the list of players called up for the international friendly against the Fennec Foxes of Algeria on September 27, 2022, allnigeriasoccer.com has been told.

The Nottingham Forest striker was handed a late call-up as an injury replacement for Olympiakos loanee Henry Onyekuru.

Dennis has recently been in touch with the Super Eagles coaches, informing them that he won't honour the invitation due to an undisclosed ailment.

The 24-year-old was in action for Forest in the last round of matches in the English Premier League, coming off the bench for the last two minutes of their 3-2 loss to Fulham at the City Ground.

It is understood that the Nigeria Football Federation will not call a replacement for the fomer Watford marksman.

Eighteen of the invited players were in camp as at 2317 hours on Monday, meaning only six players are now being expected to link up with the team in Algeria.

Jose Peseiro will begin running the rule over the players in camp as from 1630 hours on Tuesday when the Super Eagles are scheduled to begin their first training session ahead of the friendly against Algeria.