...the complete Nigerian football portal
Subscribe
Official : Freund remains at Tijani's Salzburg, will not be moving to Chelsea
Published: September 20, 2022 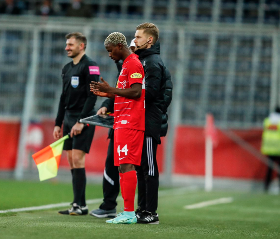 Christoph Freund is to remain sporting director of Samson Tijani's Red Bull Salzburg amid interest from Premier League side Chelsea, the Austrian champions have informed via their official website.

Freund played a key role in Salzburg's capture of the former Golden Eaglets captain in 2020 and was also behind the deal bringing Bright Edomwonyi to the club ten years ago.

The 45-year-old succeeded Ralf Rangnick as sporting director for the 2015-2016 season and since then, Salzburg have won seven Bundesliga titles and six Austrian Cups.

Recently, Sazlburg drew 1-1 with Chelsea in the Champions League, a game in which 2022 European U19 champion of Nigerian descent, Carney Chukwuemeka was an unused substitute.

"As I have already confirmed in interviews, Chelsea have been interested in hiring me. When a big club like that shows interest, it is an honour not only for me and the work of FC Red Bull Salzburg, it is also a situation that requires a number of personal considerations," Freund said to Salzburg's official website.

"I came to the conclusion that I am in the best place at FC Red Bull Salzburg, and a move was out of the question for me."

Tijani has been inactive for Salzburg this season after breaking his tibia and fibula in a pre-season friendly against Feyenoord Rotterdam.

The one-cap Nigeria international made five appearances for Salzburg's first team in 2021-2022, including a Champions League debut against Bayern Munich.