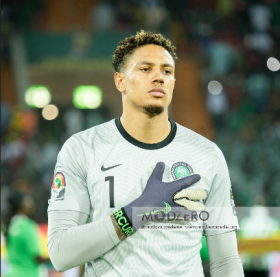 Former Super Eagles left-back Ifeanyi Udeze has thumbed up the invitations back to the Super Eagles of some players who were speculated to have quit the national team.

Nigeria head coach Jose Peseiro has named his squad for the September 27 international friendly against former African champions Algeria albeit there has been some withdrawals by some of his players through injuries.

Speaking on goalkeeper Maduka Okoye who has not been on national duty since the 2021 Africa Cup of Nations in Cameroon where his gaffe led to a goal scored by Tunisia in the Round of 16 defeat, Udeze opined that two things might have led to his nonavailability since that ouster.

"The medical report from his club then in Holland stated that he had a shoulder injury which saw him miss a lot of games," Udeze said on Brila FM.

"Anger and fear could also have led to his not being available because he was not born here. He was born abroad and over there, they have ways they do things.

"He (Maduka Okoye) was threatened. You don't blame him. That's where the anger and fear as well came from," the former Nigeria international stated.

Udeze however stressed that should he be an emissary to the Nigeria Football Federation and was mandated to speak with a player of Nigerian descent in order to change allegiance and play for the Super Eagles, he would not need to plead but be straightforward on his mission.

"Despite my opinion, should I be sent to a player of Nigerian descent abroad to convince him to play for the Super Eagles, we could go to a Cafeteria or restaurant.

"Simple, over a bottle of drink or meal, I will not sugar-coat it, I will be blunt:" Bros, they (NFF) asked me to speak with you about the possibility of playing for Nigeria. Are you in?

"If the player say yes, fantastic, if he says no, we shake hands, I pay my bills, he pays his and we leave," the onetime West Brom defender said.

The Eagles are expected to play against the home based Algerian national team before the big clash with the 'Team A' next week Tuesday.