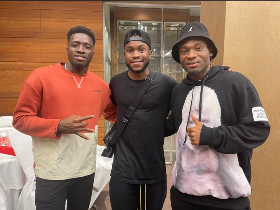 As at 2134 hours on Tuesday, September 20, twenty one invited players have reported for international duty ahead of the national team's friendly matches against Algeria.

The aforementioned players did not participate in the Super Eagles first workout on Algerian soil this evening.

2013 U17 World Cup winners Kelechi Iheanacho and Francis Uzoho, and the only home-based player named in the adjusted squad Ebube Duru were still being expected as at the time of writing this report.